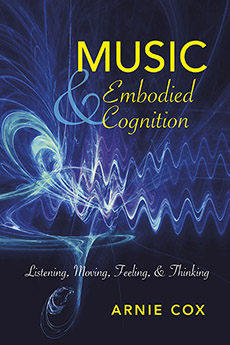 In their essay Down with Disembodiment; or Musicology and the Material Turn, Holly Watkins and Melina Esse call for for “A musicology that navigate[s] the ‘mind/body problem,’” one that “expand[s] self-awareness beyond the limited domain of symbolic thought.”[1] Hotly debated by cognitive scientists since the 1980 publication of George Lakoff and Mark Johnson’s Metaphors We Live By, Conceptual Metaphor Theory (CMT)  assumes that semantically sophisticated notions do not arise as output from a dislocated mind, but are instead facilitated by one’s bodily experiences.[2] Lakoff and Johnson turned heads, that is to say, scholars strongly attended to their argument that language—hence thought itself—is rooted in metaphor, and that the primary source domain of metaphor is physical interaction. Influential in linguistics and neuroscience, and preceded by feminist philosophies of the body in art theory and cultural studies, embodied approaches confront the cognitive revolution’s framing of the brain as computer-operator to the body-machine. This bring us, nearly four decades later, to Associate Professor of Music Theory at Oberlin Conservatory Arnie Cox’s book Music and Embodied Cognition, in which he develops a musicological application of CMT.[3]

For such is the present meaning of embodied cognition: Cox’s version roughly amounts to the interpretation of musical experience as viewed through the periscope of semiotic language, an entity often equivocated with “thought”. I contend that semantically-driven bodily awareness and embodied cognition are separable, and that their conflation is problematic particularly for music. That is not to say that Cox’s project is unworthy; on the contrary, actualizing the cerebral Venn diagram that correlates “high pitch” with “high mountain” (p. 92) is of interest to musicians, semioticians, and perhaps mountaineers. With respect to embodiment, however, the knot lies in the insidious notion that language is cognition, or at least its oracle. Cox’s system of gauging embodiment relies on words as both infrastructure and conductive medium. The order of operations in this epistemology of musical experience follows accordingly: (1) non-musical actions are embodied and codified as discourse; (2) this discourse subsequently influences and codifies future actions that are musical; (3) knowledge of embodiment in musical action is advanced through reverse-inference via discourse. In the following review I describe alternative conceptions of musical embodiment that resist contingency on referential mapping.

Let us begin with the voice. CMT posits that “metaphor[s] function only by virtue of [their] experiential basis.”[4] Cox recursively unpacks the truism of feeling “high,” for example, so that “HAPPY IS UP” reduces to “EMOTIONAL STATES ARE VERTICAL LOCATIONS” reduces to “STATES ARE LOCATIONS” (p. 75). Armed with a variety of cross-culturally validated phrases, Cox shows that abstractions such as emotion have unidirectional relationality. The grunt work of conceptualizing a complicated feeling is thus by-passed by allusion to tacit knowledge, in this case, the bodily affordance of elevation. Enter the voice, a puzzle that is “more or less equally abstract” as instrumental music, and therefore an unlikely spring for instrumental metaphor (p. 77). Nonetheless, “the voice is clearly the source domain,” as evidenced by the “pattern of vocal descriptions of instrumental sounds” (ibid.). This relationship rests on the underlying assumption that the human voice and instrumental voice can be decoupled to the extent that one is is “clearly” incidental to the other, at least metaphorically. If there were no instruments, how would musical vocal “articulation” differentiate itself from non-musical vocal “articulation” (p. 77)? What if there was no word analogous to ‘music’? A listener may experience a flautist via internal vocal mimesis, but the metaphor is precluded in an embodied cognitive understanding of the flute as prosthesis. The flautist articulates, the listener articulates sympathetically, and no further transformative link (“INSTRUMENTAL SOUNDS ARE VOCAL SOUNDS,” ibid.) is immediately necessary for either party.

The voice also plays some role in our association of high frequency pitch with literal height, a special concern for Cox to the extent that he enumerates ten different source domains (p. 93). Despite his acknowledgement that a few of these may actually be materially high, Cox argues that the high/low binary, along with “sharp”/ “heavy” and “young”/“old” from other cultures, is “founded on a fiction […] a musical world that we tacitly create by way of embodied metaphorical reasoning” (p. 107). The apparent physical exertion required to produce high pitches on a wind instrument, for example, generates the metaphor “GREATER IS HIGHER”, whereas the physical change in register from head voice and chest voice is “barely noticeable,” and moreover relies on trained subvocal mimesis in the listener (p. 95). Cox describes the feeling of sound propagation itself as “literal, but of relatively limited relevance” (p. 96), “negligible” (p.102). In a generally citation-rich book, the scarcity of works consulted for this section is telling. Cox draws on personal anecdotes, musing that there are few situations wherein sympathetic vibration is felt intensely enough to sense high frequencies in higher parts of the body. I cannot fully fault Cox for this turn, as the dearth of relevant empirical work impedes me from offering much beyond counter-anecdotes. Cognitive biologist Tecumseh Fitch speculates that bass tones are felt via “torso-based resonance,”[5] an account corroborated by profoundly deaf percussionist Evelyn Glennie: “my cheekbones tend to hum with the high note sensations and I feel the low notes deep down in the lower chest cavity,” she relates.[6] To invoke an alternative continuum, are “sharp” and “heavy” tones also fictional, thereby declaiming the pain response to shrill or piercing sound a mental construct? That the lexicon is multifunctional is indeed remarkable, but unidirectional metaphoric analysis regards some senses as second-class. And then, some senses might not be separate senses at all: Glennie reasons that her body is “one huge ear,” (ibid.) and the cohesion of touch and hearing is underscored by their potential common genetic basis.[7]

Counterintuitively—given the book’s subject—pitch but not rhythm is afforded a chapter to itself. The latter falls into “Temporal Motion and Musical Motion” (p. 109), in which Cox presents the paradox of music feeling “as though it moves despite the fact that nothing literally changes location” (p. 111).  I relate this final example to a key term in Cox’s mimetic hypothesis, laid down in Chapter 1 (p. 12). Reminiscent of Katie Overy and Istvan Molnar-Szakacs’ model of Shared Affective Motion Experience[8], his theory states that we comprehend music “by imitating […] the observed sound-producing actions of others” (emphasis mine, ibid.).  This innocuous qualification is enough to undermine the likelihood of achieving an embodied cognitive understanding of music, for it both authorizes and denies causality following normative musicological practices. Unsurprisingly, even a “marching band” is thus referential, for “the locomotion of the performers is distinct from the musical motion of what is being performed” (p. 111). Let us take it for granted that the tempo, walking feel—to borrow a musical term from less disembodied styles—and social function of a marching band have no acoustic impact on the sonic artifact, and turn instead to the proposal that “Musical motion is a special case of temporal motion […] which is itself a product of metaphoric reasoning” (p. 109). The question of whether time, in the myriad ways it is educed, can be decoupled from motion, is beyond the scope of this review. The necessity of neural motor systems for musicality, however, is increasingly evident, particularly for rhythm, even when perceived in absence of overt action.[9],[10] Furthermore, evidence from psychology has shown action and intention to mediate subjective measures of time.[11] Maybe “[m]usical motion seems or feels like actual motion” (p. 125) because there is no meaningful demarcation between time and motion, nor between self- and other-action when sharing in musical time.

Taken together, a more appropriate title may have been Music and Metaphoric Language Concerning Music. CMT allows us to see past, and into, symbolic thought, but music is semantically unanchored, and dissociable from its physicality. It does not require translation between non-musical actions and itself to make motor sense, affective sense, or any other non-discursive sense. Furthermore, although I admire Cox’s earnest tone, clarity, and pleasurable prose, Music and Embodied Cognition is weighed down by its reliance on CMT, which adjures metaphoric vocabulary lists, excurses into etymology, and many pages of explication. Only in the final third, having triangulated how music feels by way of its own discourse, does Cox introduce “Eight Avenues of Musical Affect” (p. 176), a framework designed to interpret the ineffable. Now in his element, Cox deftly performs this new method in two studies of post-tonal music by Webern and Stockhausen (p. 200), chosen for the sensual incomprehension they evoke in his students. His hermeneutic approach is compelling, as is the final chapter, wherein Cox broaches the possibility that “ME and THE MUSIC” may not be so distinct, after all (p. 224). These closing remarks signal an abrupt change of tone, one that contributes to an overall sense that Music and Embodied Cognition was a lengthy project. If its derivation is dated to the advent of CMT, that was indeed a long time coming. While this book does not speak for corporeality, it can tell us this: should music be a guide to the mind/body problem, the solution will not lie with metaphor.